Instagram is about to change in a massive way. The photo and video sharing app is taking a page from Facebook and testing an algorithm based timeline.

This means that photos and videos shared to Instagram will no longer appear in chronological order and will instead appear based on the likelihood you’ll be interested in the content and your relationship with the person posting.

The change could mean that if your best friend posted an image while you were away from your phone for a number of hours, Instagram might place that content at the top of your feed the next time you open the app.

In a blog post announcing the change on March 15, Instagram says that they’re focusing on optimizing the ordering of posts and that most users miss on average 70% of their feeds. The post goes on to explain:

As Instagram has grown, it’s become harder to keep up with all the photos and videos people share. This means you often don’t see the posts you might care about the most.

To improve your experience, your feed will soon be ordered to show the moments we believe you will care about the most.

Speaking to the New York Times, Instagram co-founder, Kevin Systrom, also made reference the fact that users miss 70% of their feed, explaining: “What this is about is making sure that the 30 percent you see is the best 30 percent possible.”

Systrom appears to be very mindful of how the change may feel to the Instagram community too, “if it’s one thing we do really well as a company, it’s that we take big change slowly and deliberately and bring the community along with us,” he said. “It’s not like people will wake up tomorrow and have a different Instagram.”

Though the change is in testing with an unspecified single-digit percentage of users as of now, it’s yet to be confirmed when the change could be rolled out to all users. In their blog post, Instagram simply says the new experience will be seen in the coming months. 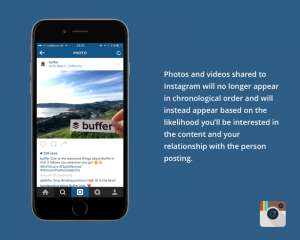 Using an algorithm could seem like a natural progression for Instagram. The platform currently has more than 400 million regular users. And with 75% of Instagram’s audience coming from outside the United States, Mike Krieger, Instagram’s co-founder, and chief technology officer, believes this change may face less pushback as time isn’t quite as important to Instagram’s content as it is on other platforms.

“Look at my feed now. I follow accounts from all over the world,” Krieger said to the New York Times, “it doesn’t really matter to me what time it is.”

The announcement comes fresh off the back of some research by Quintly, who analyzed 10,000 Instagram  proﬁles during the full year of 2015, and found that while the number of times brands are posting to Instagram is up, their engagement is falling.

Quintly’s study found that marketing-led post frequency has increased from 0.84 posts per day to an average of 1.04 posts per day. At same the time interaction rate dropped from 4.96 to 3.10 during the year. 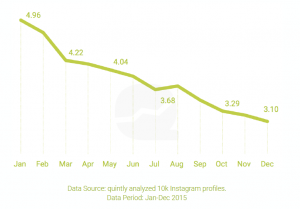 The results of this study could simply be down to Instagram maturing as a product. And the switch to an algorithm-lead timeline could help brands to reach their most loyal followers and improve their interaction rates.

The change could also bolster Instagram’s advertising product in the long run. If the algorithm-based timeline can succeed in showing users the most compelling and relevant content, then time people spend using Instagram could also increase, providing more opportunities to serve targeted ads to users.